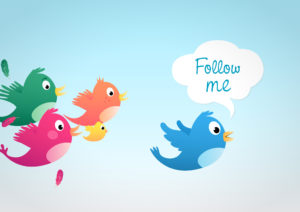 Companies are always being told that their customers are on Twitter, so they need to be too. If you’re an airline or a mobile phone company, it’s true. At least some of your customers will be talking about you on Twitter, trying to contact you or complaining about something that has gone wrong.

What is less clear is how companies selling to businesses should use Twitter. Do they need to be on Twitter? What do they lose if they’re not? What should they aim to achieve from their Twitter activity? Who should they be trying to reach out to? How can Twitter justify the time invested in it? How do you measure the results?

Most Twitter accounts at small to medium sized B2B companies were started by someone in the marketing department. Someone who was keen and interested in Twitter, and probably about the same time they started their company Facebook and LinkedIn pages.

There are three stages that apply to most B2B companies on Twitter:

2. Leadership – Turning their Twitter feed into a place for people who want to keep up with what is going on in the industry, breaking news, and commentary on trends and issues.

3. Engagement – Using Twitter to truly engage with customers, prospects, journalists, analysts and industry influencers – getting involved in conversations, leading discussions and being seen as an expert in their space.

Most B2B companies are at Stage One, and are quite happy to stay there. It is easy to manage, they have some people following them, and it’s a nice additional marketing channel to spread the word about what they are doing.

A few companies have moved to Stage Two. They will be looking out for news as it breaks, sharing it with their followers, using hash tags to comment on issues that are trending in their space, and will use their Twitter account to position themselves as thought leaders. They hope to create an account that people will want to follow because it will help them stay on top of what they need to know about their industry.

A small percentage of companies are at Stage Three. They will invest much more time in their Twitter account and will use it as a tool to help build relationships with key individuals, in addition to the activity of stages one and two.

The hardest thing about Twitter is measuring ROI. Especially in the B2B space where you are unlikely to see a direct correlation between Twitter and sales for example.  But you can benchmark and measure Twitter followers, re-tweets, interactions (how many times people Tweet about you) and visits to your website.

If you are able to identify which of your customers and prospects are on Twitter, then you can also measure how many of those start to follow you or re-tweet what you say. If you could even get to the stage where you could say that over a 12 month period, people who follow you on Twitter are X% more likely to buy than those who don’t, then you can really start to justify the work involved.

Ultimately, though, I believe that Twitter will come down to pure gut reaction for a while yet at least. If people in your organisation believe in Twitter and are enthusiastic about what you are doing, then half the battle is already won. If they don’t think it makes a difference, it will always take a lot to change their mind!

In conclusion, I believe that Twitter can have an important role to play for companies in the B2B space. There are different ways that they can get involved, that require different levels of time and commitment – so companies can find the balance that works for them. Ultimately it comes down to where you customers, your competitors and influencers in your industry are – if they are on Twitter, then can you justify ignoring it?