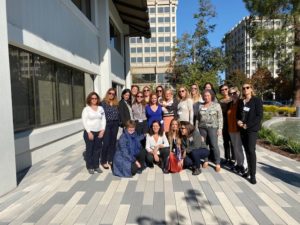 A mix of The Apprentice and the Big Brother House!

What on earth possesses one to leave a business behind for one whole week, descend into a “Big Brother” house with a load of female strangers, only to sit through back-to-back meetings from 9:30 in the morning to 9:30 at night, as if starring in an episode of ‘The Apprentice’?

Despite it sounding like total madness – in reality, it was the most sane, insightful and mind- expanding experience of my life. I got to spend a week in Silicon Valley with 16 amazing Israeli women and my daughter, Jasmine.

This was mainly down to the good fortune of meeting NEOME, a women-only investing club, whose main aim is to teach women from all walks of life how to become independent investors in smart start-ups and encourage those start-ups to employ women in management and in board roles.

NEOME is the brainchild of Inbal Polak and Orit Alperovitz,  an investment banker and a lawyer respectively. They met while working in mostly male-dominated business roles and were thoroughly fed up watching 98% of VC money go to male-dominated companies. So, over the past two years they’ve built up an incredible network of 45 women investors – mainly in Israel – having already made some very clever investments. After two years, they decided to spread their wings and develop an ecosystem beyond Israel to look for more investors and investments.

When Jasmine and I heard of their trek to California, we jumped at the chance to meet the good and the great of Silicon Valley. The trip was a bit like a Harvard Business Course on steroids, where we were immersed in the world of investing, from meeting the best VCs in the world to understanding what makes a Unicorn and being shown that protecting your IP early on can save many millions of dollars in the long run. We also learned about the art of story-telling and how China is growing at an unimaginably fast pace – soon to leave the rest of us behind.

The people we met in our 24 meetings were legendary (and far too many to mention), but those that stood out for me were: Jack Hidary from GoogleX; Amir Kaspir from Google;  Michelle Messina and Jonathan Baer, authors of “Decoding Silicon Valley”; Donna Griffit – story teller extraordinaire; Shiri Sehnhav and Shauna France from Morrison & Foerster on the M&A market; and Steve Krausz and Jacques Benkoshi from US Ventures. We also experienced a cool talk from Efrat Turgeman from Silicon Valley Bank, met with Assaf Wand from the Unicorn Hippo Insurance, found out about the foodtech scene from Eyal Briller at Impossible Foods. My jaw really dropped when we learned about patents and IP law from Sonal Mehta at Wilmerhale and not to forget the philanthropic work that Darya Henig Shaked is doing with WeAct Ventures. We were pitched to throughout the week from some awesome women, all organised by an incredible lady - Linda Holroyd, CEO of Fountain Blue.

So, what were my key takeaways?

One of the other great highlights of the week was meeting Donna Griffit, a corporate storyteller who gave us many useful takeaways about presenting your story that can apply to any sort of presentation, mainly:

The trip reminded me of so many things I know, but had forgotten, namely that the personal touch is still the only way to get business done and that people do want to get out from behind their computers to network, talk and eye-ball each other. That’s how the best decisions and partnerships are cemented.  Small events still work, now more so than ever – the more focused they are the better.

I reminded myself that it’s okay to reach out and contact people over the phone, LinkedIn or by email. In the Valley, the men are pushy and it works. As women, we often aren’t pushy as it’s not “quite right”; and in the UK even less so as we are often just ‘too British’. That’s not going to work if you really want to succeed – so use your network or ask people to recommend you if you’re looking for new business.

I also realised that the basics haven’t really changed – maybe just got a bit faster with social media. And that a good idea still needs thorough market research, lots of hard work to get it out there, great marketing and PR, a brilliant sales team and a CEO who can sell. It all comes back to having that good network as an essential.

Jasmine and I walked away from our week in the Valley far better educated women who have made lifelong friends and great contacts. For that, we are hugely indebted and grateful to Inbal and Orit